The user role in your Waterfall development methodology

Incorporating user feedback into Waterfall development can help ensure that the final product meets the needs of the users and market fit is achieved. However, user feedback also plays an important role in enhancing your software team’s effectiveness and ability to deliver at each sequential step throughout the entirety of the development process as the Waterfall relies on clarity and completeness to progress. But having feedback fail, can lead to the entire waterfall process failing, so it’s worth paying attention to just how best to incorporate users into the Waterfall development methodology you’re utilizing to maximize your results.

Software teams opting to utilize the Waterfall development methodology should aim to collect user feedback at each stage of the development process, and incorporate into the current and next stage. For example, user feedback gathered during the analysis and requirements gathering phase can be used to refine the requirements for the next phase of design. Or user feedback gathered during testing can be used to more accurately and easily identify issues relating to the software build phase, speeding time to market and resulting in a better market fit. 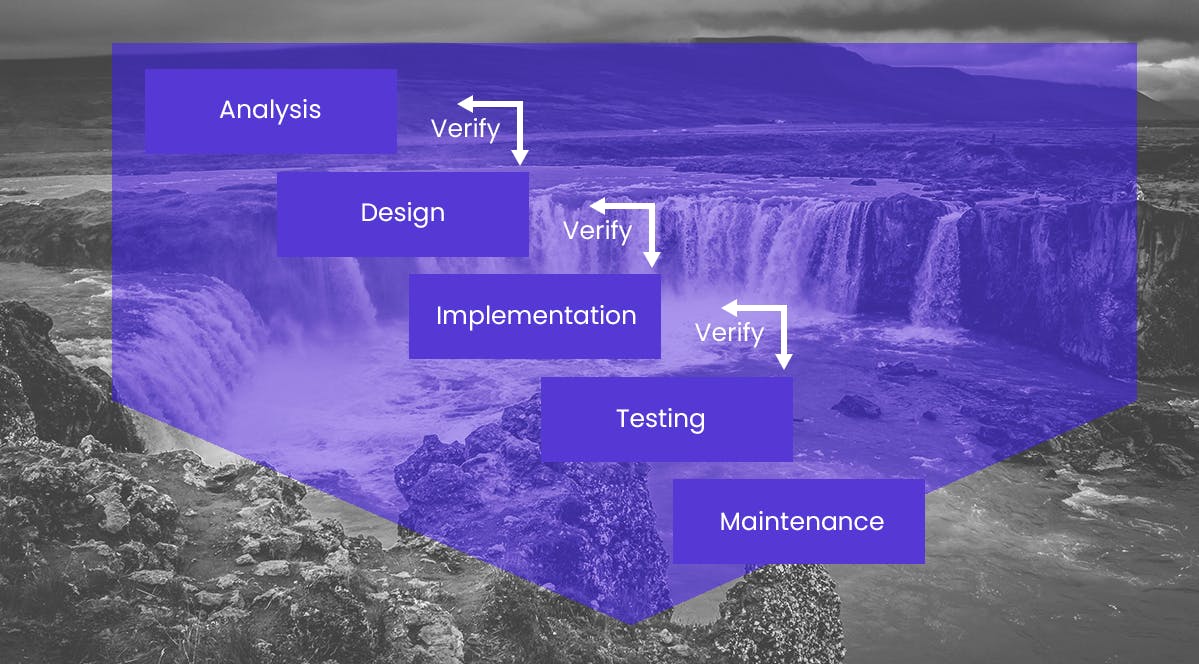 Your Waterfall development methodology should be a process for developing software that is well-defined and strictly sequential. Being that software teams must complete an entire step before moving onto the next one, a major part of the Waterfall is that any roadblocks are brought out right away so that the project doesn’t continue onward without being actioned at the time of current stage.

Analysis is the first stage here. Requirement gathering and documentation in its initial phases may require the traditional focus group based approach to market research, garnering user feedback directly from small or larger groups of opted-in individuals that form groups. Small scale testing in this fashion should be married up with more macro environmental research examining a product’s potential market fit and the needs/wants of the targeted market. By combining both approaches, Product Managers can validate macro learnings with micro insights from their perceived audience to ensure initial design is in line with the user needs.

System Design Stage sees developers build out the logical design of the system itself to ensure it works with underlying hardware and software technologies. This phase is largely an internal step, based on the requirements of the build gathered in the previous stage (which should be informed by market and user research).

Implementation takes the design principles and puts pen to paper on them, or rather keyboard to screen as coding begins. As with any development, software and web development remains an imperfect science, and errors are going to be made resulting in some obvious and some not so obvious bugs. Beyond the bugs, developers should consider design elements and translating them into the product build. It is here where teams can seek a different form of user feedback, opting to integrate modern user feedback platforms throughout the build to collect visual feedback in the form of annotated screenshots, video and full session replays and deliver the feedback directly into existing implementation workstreams. By adopting feedback here – through simple on app/site widgets – developers can collect feedback as users engage with the product in development and ensure the code build is as close to design as possible. This feedback-centric development approach will help speed the implementation cycle and help product get to market faster by eliminating the slow, manual user group model used earlier, increasing the clarity and accuracy of feedback for developers, and put the feedback in a location where it’s actionable by teams, not buried in an inbox somewhere.

At the Testing Stage, user feedback continues to increase in value as QA testers, beta users and other testers continue a hands-on experience with the more fully developed product. Here, the real-time, in-app or on website feedback is core to successful completion of the stage in order to progress further in the waterfall. Software teams should seek to provide a user feedback platform that enables testers simple, intuitive feedback controls to visualize and capture bugs or proposed design changes succinctly. More often than not, those that rely on email for this stage find a partial description or incorrect explanation resulting in a ticket response saying something like ‘ cannot recreate bug, ticket closed’. This outcome serves neither the user, nor the developer team. Rather, modern tools like the user feedback platforms of today will allow full session replays, recordings and images to be sent directly to teams to assess and remedy – be they Jira, basecamp, Trello, Asana, GitHub, Gitlab or whatever! The point is, information and feedback needs to be put where developers work in a clear, concise way.

By capturing feedback in this way, tickets can be prioritized by frequency of report and actioned without the slow back-and-forth leading to a faster time to stage completion and less frustrated Developers (which we all love).

Delivery/deployment Stage sees product into market, where consumers begin interaction in earnest with your product. Here the continued user feed platform should focus on collecting additional visual feedback on missed bug fixes in the previous Testing Stage (there will be bugs no matter how good your Developers are) and prioritizing for triage, and the collection of additional user feedback relating to feature requests. Most products do not launch in their final form, preferring something resembling a minimum viable product (MVP), this MVP matches the baseline established in the initial Analysis stage but has a lot of room for growth to improve market fit and drive revenue. User feedback plays the most critical role in identification of user needs/wants to contribute to this market fit and revenue growth/customer satisfaction but your user feedback tooling must be able to facilitate a flow of screening, prioritization and action as mentioned previously. Even software based user feedback tools that offer more then the humble email based approach fall short here once information is collected and Product Managers and Developers should consider carefully before making a purchase as to whether their tool is an actual feedback platform that can facilitate feedback-to-action.

After the initial launch, software teams fall into the Maintenance Stage. Like the initial launch phase, user feedback through a user feedback platform should focus on continued bug fixes, and user ideation relating to feature requests. Using the automation associated with user feedback portals, these should be sent to the platform of choice for screening by your Product Manager, before being moved into developer queues in the aforementioned tools. Modern user feedback platforms also offer at this stage a way for software teams to communicate back with their users, with an ability to display user suggested features, to create something of a user feedback roadmap. A place where users can upvote existing feature requests, or submit new ones, adding to internal product roadmaps and helping prioritize the future of your team’s application. This approach is particularly powerful for keeping users engaged, think how frustrating it is when you’ve submitted feedback and seen no response or action.

To summarize and conclude this blog a Waterfall development methodology offers some advantages to the development lifecycle and should be supported with customer feedback along the journey. Software teams should prioritize adopting a modern use feedback portal with the ability to automate and simplify collection in a visual format to cut down on miscommunications and time delays and place the screen feedback at the fingertips of the Developer teams. In doing so, teams are going to be able to progress through their initial Waterfall development stages faster and speed time to market, find better market fit to increase revenue and evolve the product while engaging users to improve customer satisfaction… all without the slow, manual feedback processes of yester-year.